The native lands currently known as the Inland Empire have a rich but overlooked history. Even the people who currently occupy the Inland Empire have little to no knowledge about its significance. This comes as no surprise, as this region is largely overshadowed by its neighbors with longer and more recognized histories: the Los Angeles and Orange Counties. However, we want to challenge the IE’s “forgotten” nature and ultimately shed light on possible resistance through autonomous organizing that centers BIPOC liberation. The crisis of racial capitalism, the worsening effects of climate change, and the horrific COVID-19 pandemic warrant immediate and effective methods of halting the gears of this oppressive machine. We have no time to lose, and we invite our fellow IE communities to rise with us.

We pose this question: how can autonomous organizing and practices be expanded into overlooked areas such as the IE, and how might these practices be transformed by modifying them on grounds unique to the IE?

Because Black and indigenous liberation must be central to any social movement, autonomous organizing must be situated within a discussion of disregarded racialized geographies, regions which have been historically neglected by the majority of social movements. Typically, autonomous organizing has occurred in urban environments, and (at times) predominantly white spaces. By contrast – as well as by surprise – one of the largest and most intense attempts at liberation spontaneously happened in Ferguson, Missouri: a predominantly Black and POC, working-class, suburban area. Every region has its own unique function within the capitalist world-system and has differing territorial relationships to systems of oppression. Autonomous strategies and decentralized coordination among struggles within these regions can be a potential method of decolonial BIPOC liberation in the United States. Let us elaborate.

The Neglected Resistance: An Analysis of the Ferguson Uprisings

By grounding these insights within the struggles for Black and indigenous liberation, we can reconnect the uprisings that occurred in Ferguson in late 2014. We argue that these uprisings exemplify the eventual fiery fate of the newest reconfigurations of capital within overlooked geographies and the racialized populations that inhabit them. In other words, Ferguson is an image from the future because of the many characteristics that Ferguson shares with other racialized working-class regions. We believe that it is in regions like these – such as the IE – that the potential for overcoming racial capitalism and the state already exists.

We want to encourage people to study the uprising in Ferguson and compare it with their particular regions. We should read up on how and why the uprisings were so effective and militant, but not overlook the reasons why Ferguson has not been analyzed and talked about enough. In particular, this points to the dynamics of urban-centric, white dominant narratives of resistance. For example, there is a tendency by some (white) organizers who over-intellectualize the conditions of the oppressed and come up with grand narratives that claim to explain all of the particularities of our histories. One similar thing to note: why is it that the moment in Seattle 1999 against the WTO meeting counts as the “beginning” of the autonomous movements in North America, while moments like Watts or LA ‘92 are not considered a comparable rupture?

Ferguson was full of spectacular forms of resistance never before seen in the US, such as: shooting back at pigs, widespread use of Molotovs, massive and quickly set fires, ease of escape from authorities, new tactics of suburban warfare, the centrality of cars to movement for the protests, the lack of surveillance, the decentralization of the physical environment, and so on. In fact, Ferguson was not an inner city; it was a suburb. The suburbs were never designed for riot prevention or optimal state repression. All of this points back to why we should learn from and grow with Black uprisings like Ferguson: the state never saw it coming, and they did not expect it to go so hard.

Resisting Neglect: When the Inland Empire Borrows from Ferguson

On the one hand, moments like the 2009 murder of Oscar Grant in Oakland or the 1991 rupture in Los Angeles point to the importance of spiritual conditions (such as the bodily, psychic and inter-generational trauma triggered by the histories of police violence and racial violence), but we must also look at material conditions (such as the economic geography and political economy). We want to argue that such overlooked, racialized, poor regions – suburbs like Ferguson or the IE – are not simply the new sites of struggle, but that they will also play a key role in the coming destabilizations of the various systems at play. It will no longer be urban centers that set the stage for rioting and replaying the spectacles of resistance, or for practicing the rituals of marches and demonstrations.

By examining the material context of Ferguson and its significance, similarities arise between Ferguson and certain regions in California, especially when looking at three factors: deindustrialization, demographic inversions, and suburban poverty. A side-by-side comparison of Ferguson and the IE displays the following resemblances: 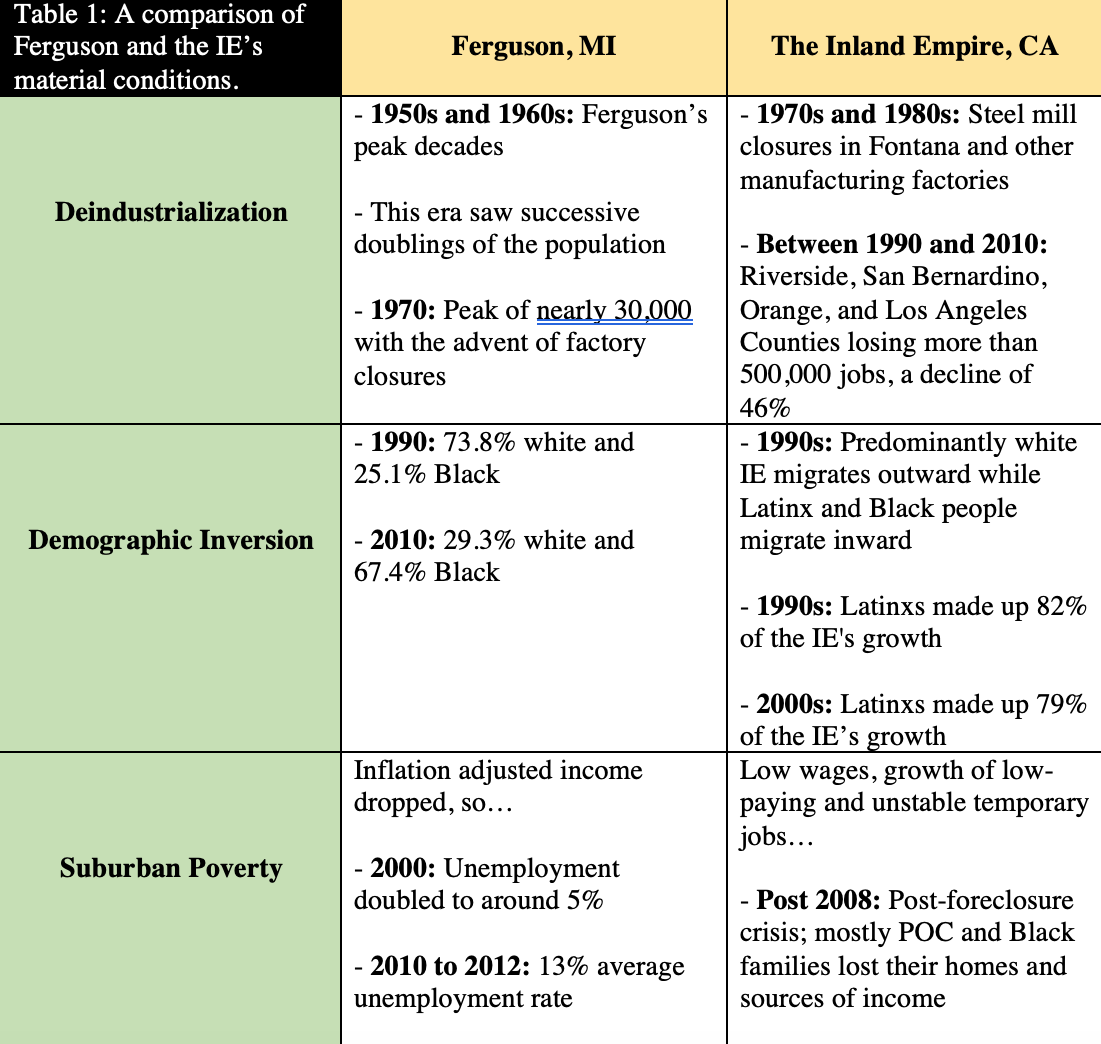 There are a few striking observations to make. The old, white, postwar, middle class suburbs are now the diverse, POC, proletarian neighborhoods. Correspondingly, the inner cities have now become gentrified (white) while the suburbs have become further impoverished (BIPOC). New forms of racialization and circuits of capital have drawn similar economic geographies and political-economies across North America. Capitalism is not what it once was in Karl Marx’s writings, and it is definitely not experienced the same way racially, genderedly, or spatially. So, we must always pay attention to material context: in this case, the Black revolt in Ferguson can reveal connections between comparable material environments that may foreshadow revolts and organizing to come here in California and the Inland Empire.

Our next blog post in this series will continue to investigate the stakes of organizing in the outskirts and learning from Black and POC uprisings like those in Ferguson.

A collaborative hub of intel dedicated to the current uprisings in the California Inland Empire, by and for IE locals.

We welcome you to submit your updates, news, photos, footage, and more in an effort to bring awareness to our region and build community among ourselves.